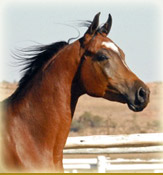 Nile Prince SMF was imported by Strydom Stud from Silver Maple Farm in California, where he was bred by Christie and Henry Metz.  Llamrai stud bought the beautiful stallion in June 2010 and imported him to Namibia.

He was used extensively at Llamrai Stud and produced many exceptional foals, adding height, good pulses and his outstanding conformation.

Sadly he is no longer with us, but we have a limited number of frozen semen that we are still using on some of our selected mares.